Pancreatic cancer~ One of the most lethal tumor. 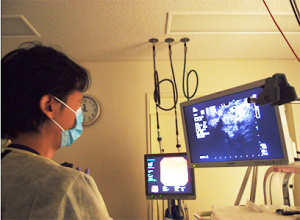 Chondroitin sulfate E (CS-E) is known to promote tumor invasion by cleaving CD44 on pancreatic cancer cells. The biosynthesis of CS-E is mediated by specific enzyme carbohydrate sulfotransferase 15 (CHST15) that is reported to correlate with poor prognosis in several types of cancer.

An open-labeled investigator’s initiated trial (IIT) through EUS-guided intratumoral injection in patients with unresectable pancreatic cancer was conducted. STNM01 (CHST15 dsRNA) was injected into the tumor under EUS guidance in 6 unresectable pancreatic cancer patients. CHST15 was highly expressed at baseline, with 2 patients showing large reductions of CHST15 at week 4. The mean OS of these patients was 15 months while it was 5.7 months for the other 4 patients. This was associated with reduction of serum sCD44v6 level.

Based on the IIT findings, the potential of CHST15 as a new therapeutic target for pancreatic cancer was suggested at least through mechanism regulating the secretion of sCD44v6. To investigate optimal treatment dose and schedule, Phase 1/2a study is now conducted as ITT in Japan.

However, in parallel with the technical improvement, “new disease condition” has arisen such as benign esophageal stricture post-endoscopic therapy. Especially, over 75% circumference ESD provides curative treatment but induces esophageal stricture that leads severe dysphagia and increases the risk of surgery. Despite intensive balloon dilatation, restenosis frequently occurs, leading to impaired QOL for patients despite complete removal of cancer.

CHST15 dsRNA was shown to repress esophageal stricture in pig ESD model without adverse effects, so would be a novel therapeutic approach to control this new disease condition.